Posted on October 30, 2013 by CreativeGrowers 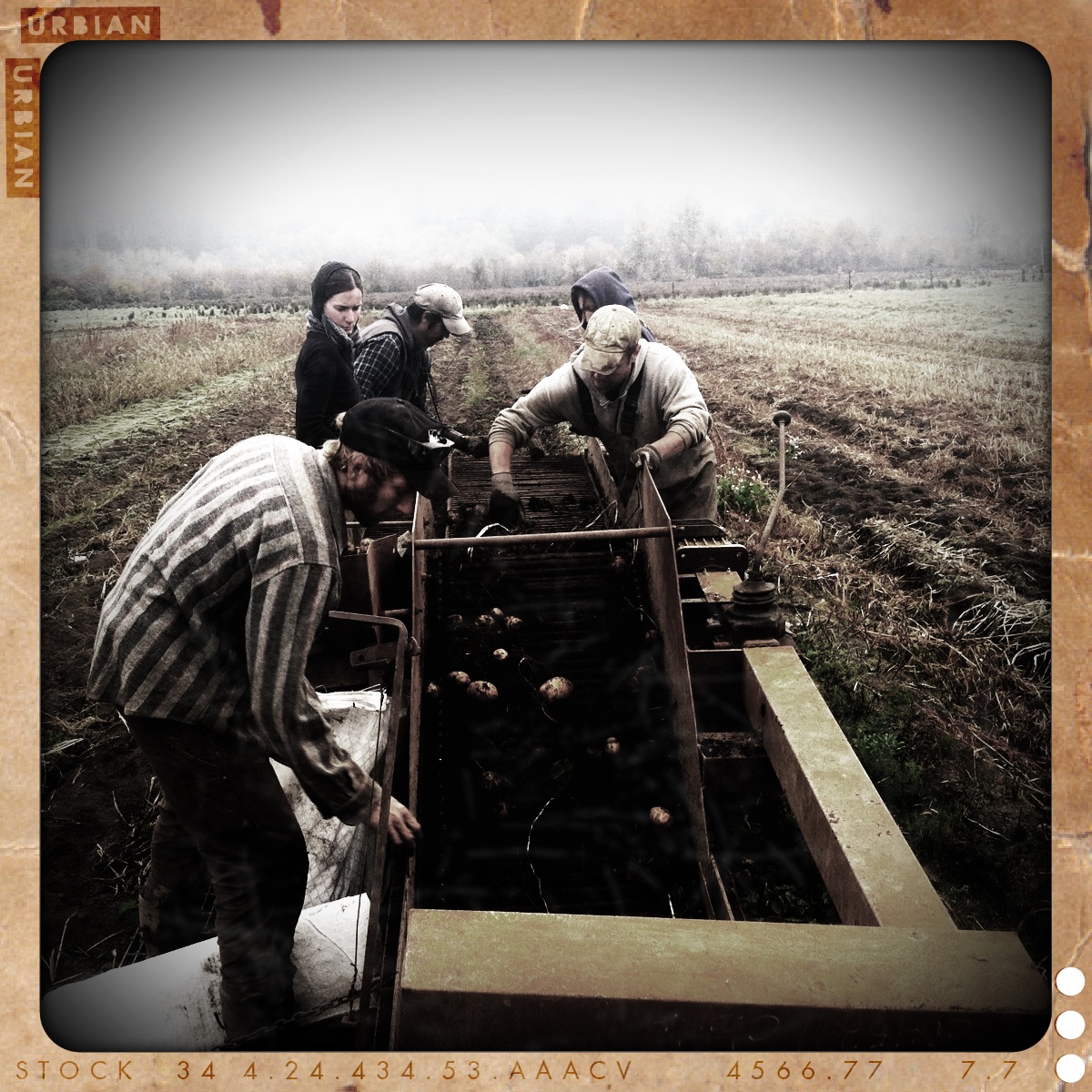 The first hard frost of the fall covered the farm yesterday morning. Predicted and prepared for it was strangely welcome. A late start for the crew and the harvest as there is not much to do when everything is coated in a crisp layer of ice and the water in the packing shed is frozen. Thankfully the sun rapidly warmed the fields and we set to work. Memories of harvests passed discussed while gathering the crops. Tales of having to wait until late afternoon for kale plants to defrost enough to harvest or salad greens washed in a bathtub when all other water pipes were frozen. With stories of fingers so numb they couldn’t work a twist tie and chiseling roots out of frozen soil, we were all thankful for the beautiful day that followed the thaw.

Collard greens in the box again to illustrate how the frost can really sweeten a crop. The stalks alone have become so sweet they were compared to sugar snap peas. Back in my younger, louder days I would state righteously how we wouldn’t sell kale to chefs until after the first frost. Its pre freeze flavor not worthy of the availability list. With kale non used in kitchens almost year round I have backed off from this philosophy, hey if they want it, they can have it. A bumper broccoli harvest of rally nice sized heads this week has us putting two pounds in each box and the parsnip onslaught continues. Each season there is always at least one vegetable that is so abundant that I start to feel that we are sending you too much. Last year was turnips, the year before French Breakfast radishes and this year it appears to be parsnips. This is partly due to my mission to move this much maligned vegetable into a more prominent place in the American diet and partly due to the fact that we had an excellent crop this season.

Dave, Lori and the crew.

Preheat broiler. Heat oil in large ovenproof skillet over high heat. Sauté peppers and onions until soft, about 5 minutes. Add broccoli pieces and garlic, stirring to coat with oil. Reduce heat to medium, cover, and cook until vegetables are crisp-tender, about 4 minutes.

Meanwhile, whisk together eggs and next 4 ingredients in large bowl. Arrange vegetables evenly in skillet, then pour in egg mixture. Cover and cook over medium-low heat until eggs are set around edges and almost set in center, about 8 minutes. Sprinkle evenly with cheese. Transfer skillet to broiler and heat until eggs are completely set and cheese is melted and bubbling, about 2 minutes. Run spatula around skillet edges to loosen frittata. Cut into wedges and serve hot or at room temperature.

In a large bowl, toss the broccoli with the garlic, ginger, dill, mustard, and oil. Pack the mixture into a 2 quart jar. Combine the vinegar and water, and dissolve the salt in the liquid. Pour the liquid over the broccoli. Cap the jar. Store the jar in the fridge at least one week before eating. It should keep in the fridge for at least several weeks. Makes 2 quarts

Bake for 20 to 25 minutes, or until parsnip strips are crispy and golden brown. Allow strips to cool on baking sheets before removing.