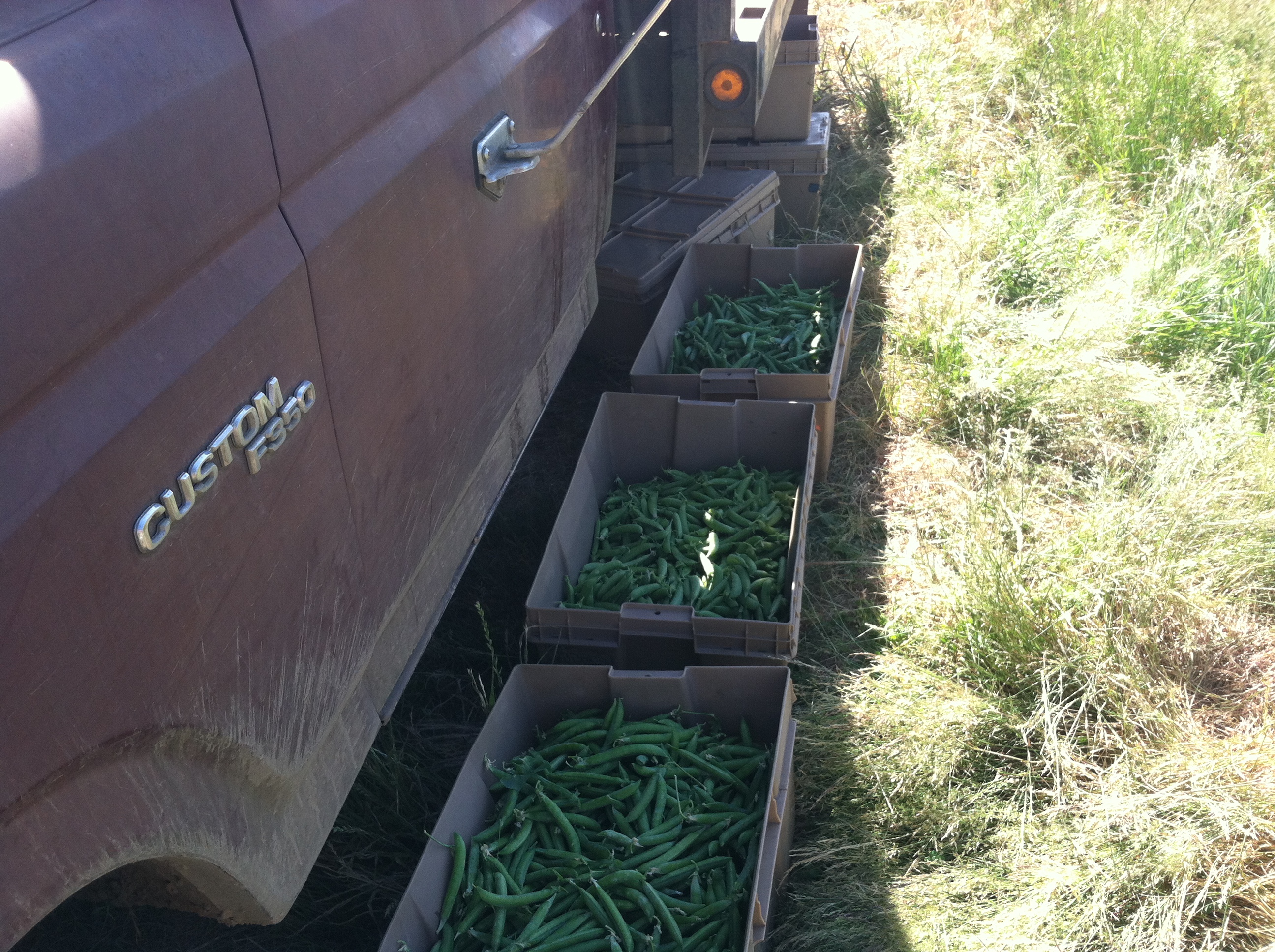 Before I start rambling about fava beans and other such farmy stuff…… Our dear friends at Tails and Trotters butcher shop Aaron and Kelly are going for the Chase Bank Mission Street Grant this year. Its a great program from Chase that could put some expansion  capital in the hands of hard working small business folks. Aaron and Kelly were our original farming partners back in the day and we wouldn’t be where we are without them. They need a few more votes to qualify for the first round of the grant process please go to the link and cast your vote. Thanks, Dave

and now for something more beany…..

The first fava bean harvest of the season is always a happy day for me, especially this year after a frenzied spring planting was in order when we lost our entire overwintering crop. Long a seasonal staple in the Mediterranean diet and around the world, fresh fava beans have only recently begun to gain popularity in the U.S. I think our high speed, fast food culture frowns too easily on a vegetable that requires two stages to prep and produces more compost than edible product. I’m a patient man, as a farmer and father it sort of comes with the territory. I’ve waited a year to toss these tasty little green treats in some good olive oil, the time to shuck and peel them seems insignificant. I hope that after you eat them you’ll feel the same way I do, content with the knowledge that the humble fava bean is only one of the truly great tastes of the season, the best is yet to come.

Grilled:
Simply toss the beans in their pods in an olive oil in a large bowl.
Toss them in a single layer on a hot grill and flip when they start to char.
Remove sprinkle a little salt and eat after removing the bean from the pod
(like edamame)
I prefer to remove the inner bean from the ’skin’ with a nick of my thumbnail and a little squeeze to coax out the tasty soft inner core.
The salt and charred bits of pod on your fingers adds to the flavor
Careful with the kids (or mildly intoxicated adults) as the beans within the pod can be very hot.

To prepare the fava beans for cooking the old fashioned way, remove them from their pods. Bring a large pot of water to a rolling boil, and fill a large bowl with ice water. Blanch the beans in the boiling water for one to two minutes, until they slip fairly readily from their skins. Transfer the beans with a skimmer or slotted spoon to the ice water. When they’re cool, drain the water and remove the beans from their skins. See this youtube video for a chef demo. (Alright the robots can be helpful, I know) http://www.youtube.com/watch?v=k33UyOHxtT8&feature=related Once prepped they can be sautéed lightly in a little olive oil and enjoyed as a side or tossed into pasta.

Scallion Pancakes
Ingredients:
2 1/2 cups flour, plus more for flouring the rolling surface
1 cup water
2 teaspoons oil
A bunch of green onions, green and white parts, chopped medium-fine
A few tablespoons of oil to brush on pancakes (a mix of canola or corn oil and sesame oil is good) some salt A few tablespoons sesame seeds (optional)
Directions:
Mix together the first three ingredients by hand or in a food processor. Flour a surface and knead the dough. Let it rest for 20-30 minutes before continuing.
With a rolling pin, roll the dough out on a well-floured surface into a big, flat square or rectangle 1/8 to 1/4 inch thick.
Brush the pancake with a bit of oil, and sprinkle with spring onion pieces and a little salt. Starting at one short end, roll up the dough tightly, jelly-roll style, so you have a “snake.”
Cut the “snake” crosswise into 8 – 10 pieces. Then flatten each piece again gently with your palm and rolling pin to make a little rectangle. Don’t flatten it too firmly, because you want a little air to remain trapped between the layers of the pancakes so they’ll puff up a bit between the layers and be lighter.
Press one or both sides in sesame seeds (optional).
Heat a tablespoon or two of oil in a large skillet. Shallow fry the pancakes until both sides are golden brown and crispy. Drain on paper towels.
Serve plain or with dipping sauce. An easy sauce can be made by mixing soy sauce with a little minced garlic, scallion, and rice vinegar.
SCALLION GOAT CHEESE MUFFINS
1 cup whole milk
4 ounces soft mild goat cheese
1 1/2 cups all-purpose flour
1 tablespoon baking powder
1 1/2 teaspoons sugar
1/2 teaspoon salt
3/4 stick (6 tablespoons) unsalted butter
1 large egg
1 bunch scallions
Preheat oven to 400¡F. and butter twelve 1/3-cup muffin cups.
In a small bowl stir together 2 tablespoons milk and goat cheese until combined. Into a bowl sift
together flour, baking powder, sugar, and salt. Melt butter and in another small bowl whisk together
with remaining milk and egg. Finely chop enough scallions to measure 1 cup. Stir butter mixture and
scallions into flour mixture until just combined. Divide half of batter evenly among muffin cups and
top each with about 2 teaspoons goat cheese filling. Divide remaining batter over filling. Bake muffins
in middle of oven until golden and a tester comes out clean, about 20 minutes.
Makes 12 muffins. Gourmet