Posted on October 9, 2013 by CreativeGrowers 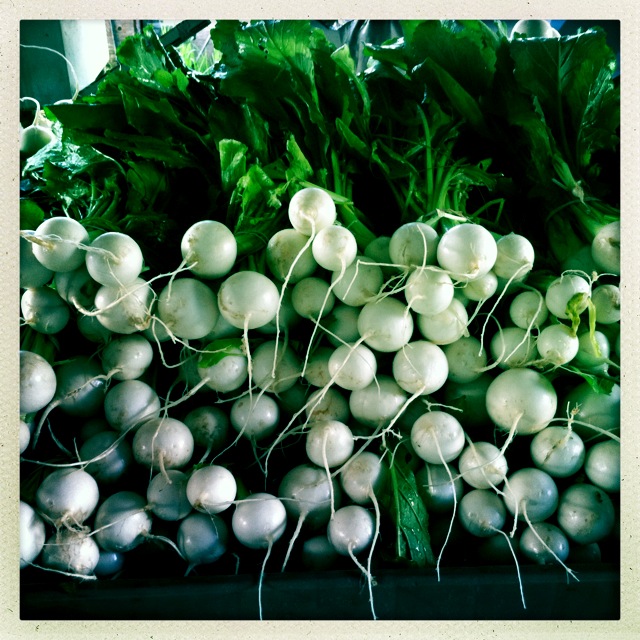 Fall is in full swing on the farm and we continue to break down the summer set ups in preparation for the big move at the end of the season. Tomato trellises are out of the field, storage root and squash harvests continue and we wait for enough of a dry spell to plow down fields and seed them back to pasture. The two former employees that bought the Noti farm from us are raising sheep, chickens and ducks so the farm will return to the permanent pasture system that it was prior to our arrival there what seems like a lifetime ago.

With the crew dwindling in numbers back to the hardcore few we still need to work longer days in order to get everything, harvested washed and packed in a day. It was great to pack the boxes with the crew and see that they have managed to maintain their senses of humor given where we are in the season and the wet and muddy conditions. I love hearing the little comments as the boxes pass through the pack line that show how much they care about what they do and the pride that they take in the work.

I am truly lucky to work with such a great crew and in a year in which I was crazier than usual their ability to hold it together and get the job done is making the transition to the new farm thus far manageable.

A very fall box of vegetables this week with root crops taking their starring role in the seasonal diet. The white turnips in your box are a Japanese heirloom variety and can be eaten raw or cooked. Thinly sliced and lightly dressed with oil, vinegar, salt and pepper they are a sweet and spicy flavor bomb and a favorite in our house. Some of you will have baby parsnips in your box, usually set aside for our restaurant customers, these plate able little treats are best tossed in olive oil and roasted whole until the skins get crispy.

How to store parsnips: in a bag in the fridge.

Peel and thinly slice parsnips, I think about the width of a slender fast food French fry. Mine are not nearly as uniform as restaurant fries, but it adds to the charm of this dish. Put parsnip strips in a mixing bowl and splash in some olive oil, sprinkle with salt and pepper and mix to coat, I’m somewhat generous, but I end up using lots less than I would if I actually fried them. Spread the parsnips out on a large jelly roll baking pan. Bake at 450, mixing with a long wooden spoon every 10 minutes or so until browning and crispy. Warning: these are addictive. Our children even like them…

Peel and dice about equal quantities of parsnips and potatoes. To control their cooking times, cook each vegetable separately, in boiling salted water. Puree them together and season with salt and pepper. Finish with butter and thin to the desired consistency with warm milk.

In a medium saucepan, bring two inches of water to a boil over high heat. Meanwhile, peel the Potatoes and parsnips; cut them into 1/2-inch cubes, and add them to the boiling water. Boil 5-10 minutes, or until tender. Drain well. In a 12-inch skillet over medium heat, warm the oil. Add onion and cook about 5 minutes, stirring occasionally. Add the potatoes and parsnips, salt, paprika, and pepper to the skillet, and cook 5 to 10 minutes longer over medium-high heat, stirring frequently, until the vegetables are golden brown. (Makes 6 servings)

Good cooks never discard the nutritious beet greens. Here, the greens are combined with roasted beets, capers and feta in a Greek-inspired salad.

This recipe includes the best way to roast beets for any application. We find that the skins will ‘slip’ off under running water if you rub them with a dish towel.

Transfer greens to medium bowl. Toss with enough dressing to coat. Season to taste with salt and pepper. Arrange beets in center of platter. Surround with greens; sprinkle with feta. Drizzle with any remaining dressing.

Turnip Tips
adapted from “From Asparagus to Zucchini”

*Eat turnips raw. Slice or thickly julienne and add to vegetable platter or eat alone with or without dip.
*Grate raw into salads.
*Bake turnips alone for 30-45 minutes at 350 degrees, basted with oil, or bake along with other seasonal roots.
*Cook turnips with roasting meats.
*Mash or scallop turnips, just like you would potatoes.
* Dice turnips into soups or stews, and julienne into stir fries.

Halve the turnips, reserving any greens for another use. Heat a large, cast iron skillet until very hot. Add a couple tablespoons olive oil and sear the turnips, cut side down, until darkly colored. Flip the turnips, sprinkle them with salt, and continue to sear the rounded sides for another couple minutes, or until deeply colored.
Add a quarter cup of water to the pan and immediately cover the skillet with a lid or sheet pan. Lower the heat and allow the turnips to steam for a few minutes, or until they are as tender as you like them.
Remove the lid. If the water has not boiled off, allow it to do so now, then add the butter and bathe the turnips in the butter as it melts, a minute or two more. Sprinkle the thyme leaves over the top, taste for salt and serve warm. Delicious.